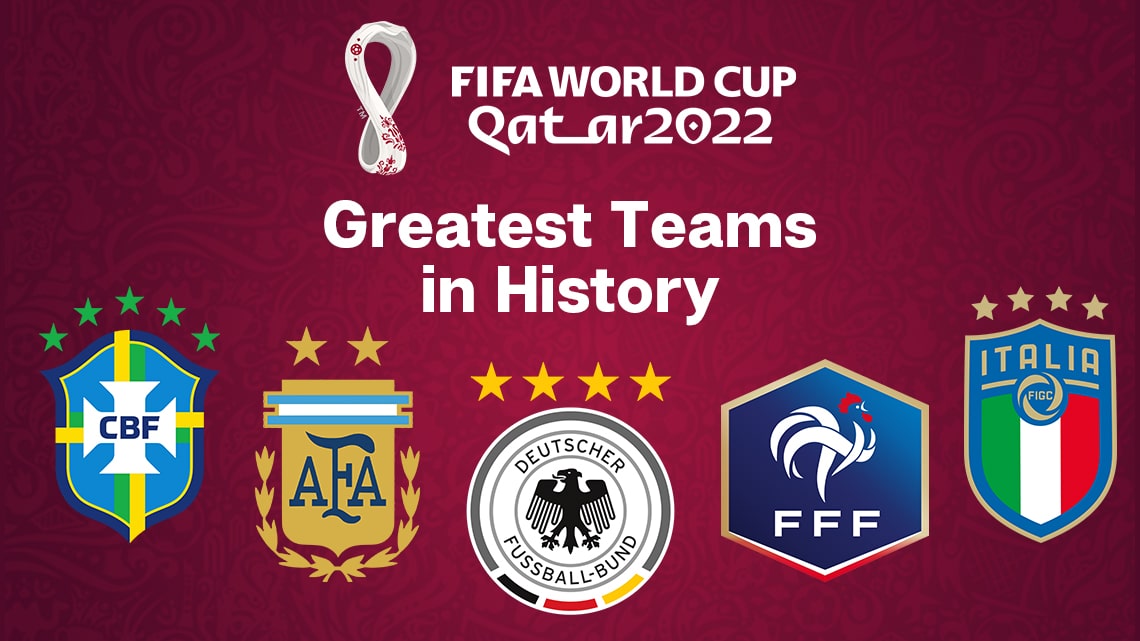 The countdown to the FIFA World Cup is ending, and the biggest football event is kicking off in Qatar on 21st November.

There are 32 teams that make it to the tournament this year. The champion will definitely come from one of those teams, and among them, there are star teams that are popular among football enthusiasts, there might also be some “dark horse” that will catch us by surprise.

That’s where the excitement lies, we will not know who will be the final winner until late December. Meanwhile, let’s look at which five among the 32 is known as the Greatest National Team in History.

Widely known as the most popular and all time favorite team. Their winning track in FIFA, winning the tournament five times, and top the game at the quarter finals for the past 21 tournament has placed Brazil as the most successful national football team in history

Besides, many great players and legends such as Ronaldinho,  Pele, Rivaldo, Ronaldo and Neymar were born in the Brazilian national team.

With the high expectation from fans and no remarkable performance in the recent World Cup tournament, there are words saying that the current team is not as strong as before. However, the current line-up of top players like Neymar, Gabriel Jesus, Vinicius Junior and Coutinho in the team has restored confidence among fans that the “Samba” team may be on their way to win their 6th championship this year.

With four FIFA world cup titles in hand, Just one trophy behind Brazil, Germany is another hot pick favorite team this year.

While their players are not as popular as the Brazilian team, their integration, teamwork and experience in major events is undisputed.

Being the winner in 2014 and their top of the game line-up comprises players like Kai Haverts, Timo Werber, Manuer Neuer and Thomas Muller, German, German is a fierce contender in the championship.

Italy who has also won four World Cup titles is regarded as one of the most successful teams. Their success factor lies in their well known solid defense. Many top defenders and midfielders can be found in Italian team history, such as Paolo Maldini, Fabio Cannavaro, Roberto Baggio, Andrea Pirlo Del Piero and legendary goalkeeper Gianluigi Buffon.

While their popularity declined since winning the championship 2006, they made a comeback by winning the UEFA Euro Cup in 2020. There will be no surprise if the 2022 trophy falls on their hand.

France is the last World Cup Winner in 2018, defeating Croatia at the final and landing their hand on their 2nd World Cup trophy since 1998.

A few football legends that were born from the French team were Zinedine Zidane, Thierry Henry, Michel Platini and Just Fontaine.

The defending team is not a pushover for other champion candidates with their top class players in the team, including Kylian Mbappe, Karim Benzema, Antoine Griezmann, N’Golo Kante. Indeed, the French team is potentially the most popular team this year.

This year, the Argentina national team will be helmed by Lionel Messi, who is known as the most successful player in the current football industry. While having Messi as a trump card, their victory in the Copa America last year, 2021 has set their momentum to bag the World Cup trophy home this year.